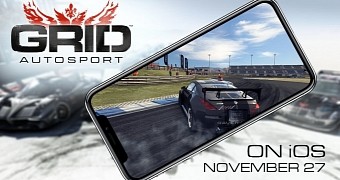 The ninth game in the TOCA series, GRID Autosport is a racing video game developed by Codemasters. It’s one of the most acclaimed racing games, and it’s already available for macOS, Linux, Windows, as well as Sony PlayStation 3 and Microsoft Xbox 360 gaming consoles, and it is now finally coming to iOS devices thanks to Feral Interactive.

GRID Autosport for iOS comes bundled with all the add-on content that was ever released for the racing game, intuitive tilt and touch controls, some of the world’s most exciting cars, as well as motorsport’s most challenging circuits. iPhone and IPad users will get the complete on November 27, 2017, and can start their high-speed career as a pro-racer.