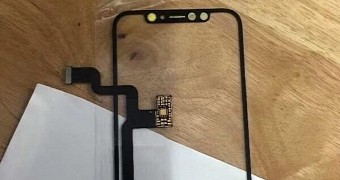 We’re only a few weeks away from the eagerly-anticipated launch of the iPhone 8, and here’s another leak allegedly revealing some of the device’s internals.

This time, the leaked photos do not reveal anything new, but they do confirm some of the details that were spotted in other unofficial photos claiming to show the upcoming iPhone 8.

For example, the display assembly does show that Apple plans to give up on the Home button entirely, going instead for what could be a fingerprint sensor embedded into the display or face recognition exclusively. The leaked panel comes with a sensor bar at the top, with the facial recognition cameras expected to be installed here as well, just next to the front-facing camera used for FaceTime and selfies.

As big as an iPhone 8 despite the larger screen

Additionally, today’s leak also reveals some of the flex cables that will be used for power transfer and the Lightning connector, as well as the iPhone 8 next to wh… (read more)