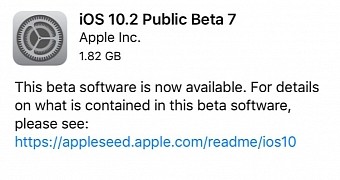 Only two days after the release of the sixth Beta of its upcoming iOS 10.2 mobile operating system for supported iPhone, iPad, and iPod touch devices, as well as Beta 5 of macOS 10.12.2 and watchOS 3.1.1, Apple has seeded new development releases.

Tagged as build 14C92, the iOS 10.2 Beta 7 and Public Beta 7 have arrived the other day, but it does not look like Apple fixed any important issues, which makes us think that Apple is only making final touches before it seeds the operating system to stable devices, which should happen as soon as next week.

As only the iOS 10.2 release received attention, We were wondering in our previous report why Apple didn’t publish new Beta versions of its upcoming tvOS 10.1 operating system for Apple TV devices and Xcode 8.2 IDE (Integrated Development Environment), but that changed as well, at lea… (read more)