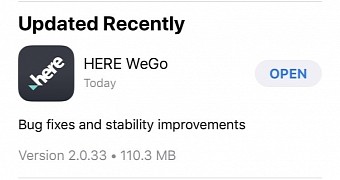 With the upcoming iOS 11.3 software update that Apple plans to release this spring for supported iPhone, iPad, and iPod touch devices, the company will bring several important changes.

Apple previewed some of the major new features and improvements coming to the iOS 11.3 operating system this spring, but there are lots of other smaller changes that matter. One of those changes we discovered by accident when we’ve tried to update installed apps via the App Store.

And, boy, we’re glad to see app size information making a comeback. Previous iOS releases like iOS 10 or iOS 9 always showed this essential information on the list of updated apps in the App Store, but it disappeared with the iOS 11 release. Now it’s finally back, at least on the <a href="http://news.softpedia.com/news/apple-seeds-first-beta-of-ios-11-3-maco… (read more)