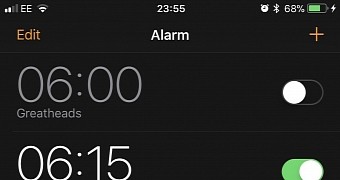 iOS 11 is slowly becoming the buggiest OS update released by Apple, with more and more issues discovered by users who update their iPhones to the latest version.

The most recent problem that people have come across in iOS 11 causes iPhone alarms to be switched to silent mode, with several users confirming on reddit that their alarms failed to go off several times.

What happens is that despite the alarm UI being triggered at the configured time, the ringer never goes off, with the screen instead staying on mute mode without any sound going off with it.

The number of reports posted online appears to be an indication that this is a common bug hit by iOS 11 devices, and no cause has been identified just yet. It happens in the case of both alarms set with the standard feature on iPhones and with Bedtime mode, and some users explain that the only workaround that did the job … (read more)