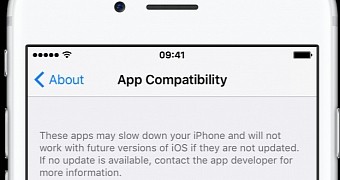 Apple is launching iOS 11 today, and it looks like they are finally killing the support for 32-bit apps on iPhone and iPads.

It’s been a long time coming, but Apple is finally moving on past the 32-bit platform. It’s only for iPhone and iPad, and it was planned for a couple of years already. You might think that developers had ample time to port their applications, but it’s more than likely people are still using older 32-bit apps.

The decision to only support 64-bit apps was an easy one because one of the side effects is that the OS become a little bit lighter. The libraries that are needed to run 32-bit apps are now gone, which also means that a number of apps won’t run anymore, even if they are already installed.

Gone from the store and no legacy support

The legacy support for older products ensures that they can run for a long time. This is why 32-bit applications run just fine in Windows 64-bit, for example. The decision was made by Apple al… (read more)