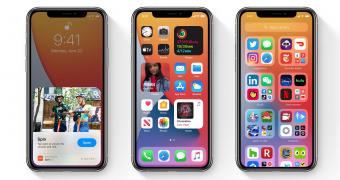 Apple has just released iOS 14 beta 3 for developers, and users can just download it from the Software Update section on their iPhones.

Needless to say, there’s no changelog for this new release, but since it’s a new beta, there’s a good chance that the focus has been on fixing things and improving the overall performance of the operating system.

iOS 14 beta 3 can be downloaded by any registered developer, and it lands some two weeks after the previous develop beta got the go-ahead of testing.

What you need to know is that since this is a beta build, you shouldn’t install it on production devices, as its purpose is to be used for testing and testing only. Developers who try out these betas can prepare their apps for the upcoming release of iOS 14, but at the same time, also send feedback to Apple to further refine the experience with certain features.