iOS 14 Is Slowly Conquering the iPhones Out There 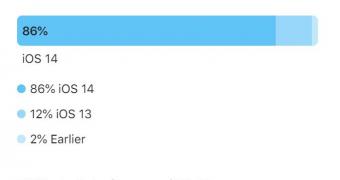 Apple launched iOS 14 the last fall, and since then, the adoption of this operating system has increased substantially, just like it typically does when Apple releases a new major update.

Given iOS 14 works on the same devices as its predecessor, namely iPhone 6s and newer, many people rushed to install it to get all the improvements that have been included by Apple, including support for widgets, the App Library, and so much more.

And this has paved the way for impressive adoption figures for iOS 14, with new data shared by Apple indicating that right now, the new operating system is already running on no less than 80 percent of all devices out there.

In other words, 8 in 10 iPhone 6s and later models are currently on the most recent operating system version, while only 12 percent stick with iOS 13. Only 8 percent of the devices are right now on an older vers… (read more)