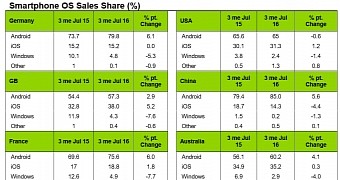 Kantar Worldpanel has just posted a new report on the smartphone sales in three regions based on device operating systems. The report focused on the US, Australia, and five main markets in Europe, namely Great Britain, Germany, France, Italy, and Spain.

The report shows that year-on-year sales for iOS in the three regions have grown in the three-month period ending July 2016. By contrast, Android recorded a year-on-year decline in sales of 0.6% from 65%. The data is quite interesting, given the fact that Apple is expected to release its newest iPhone device this week.

The numbers show that the iPhone SE has generated quite strong sales for Apple, considering that iOS accounted for 31.3% of smartphone sales in the three-month timeframe ending July 2016. Mo… (read more)