iPad Accounting for 3 in 10 Tablets Currently Out There 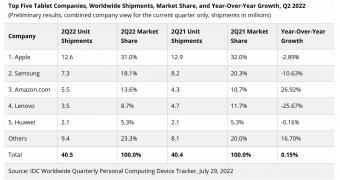 New data shared by IDC reveals that the tablet market reached 40.5 million sold units in the second quarter of the year, up 0.15 percent year-over-year.

When it comes to the brands that lead the market, Apple is by far the number one company in the tablet world.

The runner-up is Samsung, though the South Korean company is far behind with just 7.3 million tablets. Its market share dropped from 20.3 percent to 181. Percent.