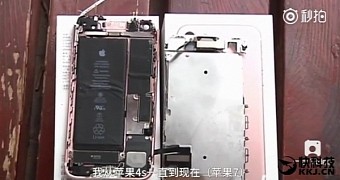 Samsung is the number one manufacturer of exploding phones, but it appears that Apple’s aiming to get the crown in this sector too, as there are reports that several iPhones caught fire in the last couple of weeks across the world.

But while the majority of reports involved older iPhone models, such as the 6 Plus, there’s now a new claim that an iPhone 7 exploded in the face of the owner, causing injuries to his face.

GizmoChina is reporting, citing Chinese media, that an iPhone 7 literally exploded when its owner was recording a video. Given the way the man was holding the iPhone to shoot the video, the flying glass from the screen’s display hurt its face, causing the injuries that you can see in the photo below.

For the moment, there’s no confirmation that this report is true, but it appears that the owner… (read more)