iPhone 7 Explodes and Breaks into Pieces While Charging 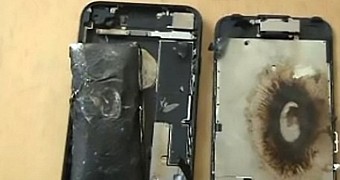 Apple fans making fun of Samsung’s exploding phones better think twice before doing it again because another iPhone 7 just went boom and evidence seems to indicate it was because of the battery.

The whole thing happened in China where iPhone owner Yin, from Suqian City in East China’s Jiangsu Province, left her device charging on the bedside table and went out for a walk.

Even though leaving phones unattended no longer seems to be a good idea given the risks posed by overheating lithium-ion batteries lately, the woman only stepped outside her home when she heard what she describes as “a loud bang.”

“My phone ran out of battery, so I left it to charge on my bedside table. I went out for a walk and heard the explosion when I came home. Then I realised it was my phone,” she was quoted as saying by the Mail.