iPhone 7 Plus and Samsung Galaxy S7, the Most Copied Phones in 2017 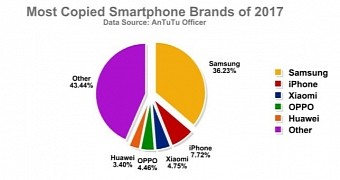 Samsung and Apple are the two brands whose devices were most often cloned by phone companies worldwide, with a new research indicating that the Galaxy S7 Edge was the device with the biggest number of copycats last year.

Specifically, Antutu data shows that Samsung was by far the most copied smartphone brand last year with a share of 36.23 percent, followed by Apple with only 7.72 percent. Xiaomi is third, while OPPO and Huawei come fourth and fifth with 4.75%, 4.46%, and 3.40%, respectively.

In terms of phone models that were cloned last year, the European version of Samsung’s Galaxy S7 Edge is the leader with 4.94%, while the Chinese version of the same phone is the runner up with 2.94%. The standard Galaxy S7 sold in Europe rounds up the top 3 with 2.81%.

The only iPhone that made the top 10 is the iPhone 7 Plus, fifth in the charts with 2.67%, while the smaller iPhone 7 is nowhere to be seen in these figures.
… (read more)