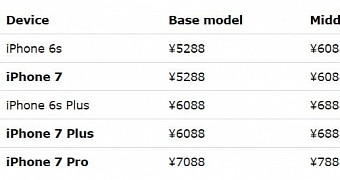 We’ve heard so many rumors about the iPhone 7, that it’s nearly impossible to say which one is true and which one isn’t. Still, it’s important to note that there are a few common points in all these reports that seem to “unofficially confirm” a number of upgrades planned for the device.

Leaving aside the typical dual-camera on the iPhone 7 Plus speculation, there’s a new report coming from China that claims to reveal the pricing of the upcoming lineup plus a little bit more.

First and foremost, the alleged leak points to three different iPhone versions, namely the standard 4.7-inch model, the Plus with a 5.5-inch screen, and a Pro version, which, according to previous rumors, could come with either a 5.7 or a 5.8-inch display.

There are different storage options for the next models, according to this leak, so while … (read more)