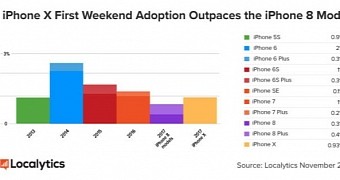 The iPhone X expected to grow into Apple’s best-selling iPhone model to date, and analysts predict the anniversary device could become “the new iPhone 6,” with total sales to easily surpass those of its last two predecessors.

But early figures provided by analytics firm Localytics indicate that while the iPhone X and the iPhone 8 combined managed to overtake the iPhone 7, the duo is still far behind the iPhone 6, whose first-weekend adoption reached 2.3 percent share.