iPhone X Is the Top Smartphone in 2018 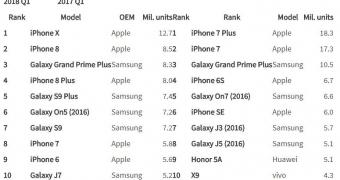 Apple is once again topping smartphone sales of the year, with new data showing that iPhone X and iPhone 8 are the two best-selling models in the first months of 2018.

IHS Markit says total shipments reached 345.5 million units in the first quarter of the year, and iPhone X was the number one accounting for no less than 12.7 million units.

But despite this strong performance, Apple still sold fewer new iPhones this year as compared to the same period in 2017. IHS Markit says Apple shipped a total of 35.6 million units of iPhone 7 and iPhone 7 Plus last year, whereas this year sales of the iPhone X and iPhone 8 reached just 21.2 million units.

This means Apple sells more older iPhones, so the 2018 generation will play a key role to convince users to upgrade. In addition to a successor to the iPhone X and a Plus-sized sibling, Apple is also expected to launch a more affordable version with LCD panel that could c… (read more)