iPhone X Plus Schematics Leak, Reveal Three Cameras on the Back 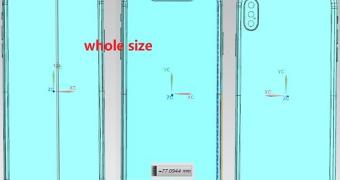 Apple’s trio of iPhones going live this year will include a Plus-sized version of the iPhone X, which according to all rumors so far could come with a 6.5-inch OLED panel.

And according to new schematics that leaked this weekend, there’s a chance that the iPhone X Plus might also feature a bigger upgrade in terms of camera performance.

It’s believed that this particular model would launch with three cameras on the back for an approach similar to the one that Huawei used on the P20 Pro. Specifics are rather sketchy at this point, but this isn’t the first time we hear about a triple camera on the back of bigger iPhone X Plus, and this could be a sign there’s indeed some truth behind the leaks.

The three cameras could be a major step forward in terms of AR and 3D push for Apple. The company… (read more)