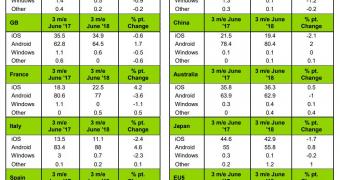 New research published by Kantar shows that iPhone X continues to sell well, helping Apple in the fight against its Android rivals and pushing the company’s massive growth in the three months ending June 2018.

Kantar reveals that Android fell 0.3 percent in the largest European markets, but it’s still the leading choice with 79.3 percent. It posted an increase in the UK, Italy, Japan, and China, and the market analysis firm says Huawei is mostly responsible for the growth.

Apple, on the other hand, recorded a “stellar” quarter, according to Kantar, posting a 5.9 percent growth in the United States, reaching 38.7 percent.

“The iPhone 8 and iPhone 8 Plus lead Apple’s sales, together accounting for nearly one in five smartphones sold, while iPhone X was the fourth best-selling device during the period. Samsung and LG have both felt the heat from Apple’s performance, seeing share fall over the year,” it says.