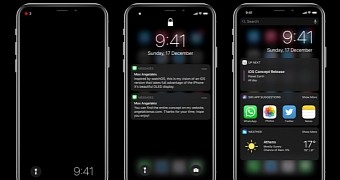 A dark theme for iOS is one of the most anticipated features on iPhones, but for some reason, Apple has until now ignored all requests to make this happen in the latest versions of its mobile operating systems.

But a dark theme now makes more sense than ever on the iPhone, especially because the anniversary iPhone X comes with an OLED screen and the bigger the amount of black used across the interface, the smaller the battery impact the display has in the end.

Designer Maximos Angelakis has created his very own concept imagining what a dark theme would look like on the iPhone X, using the interface of the Apple Watch as starting point. As compared to the iPhone, Apple Watch does use a dark UI, which again pretty much makes sense given the OLED display it uses.

As you can see for yourselves in the gallery below, the dark theme on iOS certainly looks great in this conc… (read more)