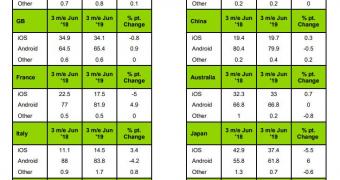 While Android is the top choice when it comes to buying a new smartphone, iPhones continue to lead the charts in the United States, according to data provided by Kantar.

Specifically, no less than 80.1% of the smartphone sales in the EU5 markets were powered by Android, while in the same market, iOS dropped 0.8% in the three months ending June 2019.

iOS dropped in the United States as well, but on the other hand, iPhones continued to be the best-selling models. iPhone XR was the top model in the US with a share of 7.8%, followed by iPhone 8 and iPhone XS Max. Samsung Galaxy S10+ and Galaxy S10 round up the top five.

iPhones growing in China too

Huawei is still doing rather well despite the US sanctions, and it actually recorded a small increase versus the same period a year ago. Kantar says Huawei owners might be waiting for some clarification in the US saga before deciding what to do next.