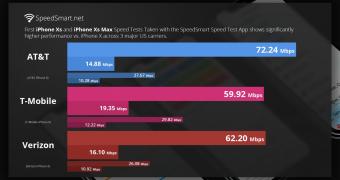 Apple’s new-generation iPhone ships on Friday, and one of the questions that have remained unanswered after the September 12 unveiling event is how fast they are in terms of LTE connectivity.

And as it turns out, they’re quite fast, according to a series of tests performed by SpeedSmart and published on Twitter.

The benchmarks were performed against the iPhone X, which is no longer on sale, on all three major US carriers, and according to the results, the new-generation models come with major improvements.

As you can see for yourselves in the screenshots here, both iPhone XS and iPhone XS Max reach higher speeds on AT&T, T-Mobile, and Verizon, and there’s a logical explanation for this: both feature 4×4 MIMO, which has a major contribution to improvements in the LTE department.

iPhone XR to be the best-selling model

This technology has been around for a long time on Android,… (read more)