iPhones Crush Android in the US Market, Drop Heavily in Europe 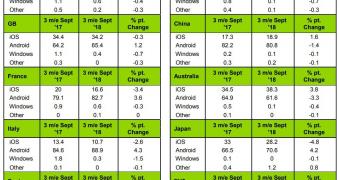 New data provided by Kantar shows that iPhone performance in the three months ending September 2018 is mixed in the largest markets across the world.

While sales in the United States have increased, mostly thanks to the iPhone 8, the device declined substantially in Europe, with major drops in nearly every country.

iPhone sales improved by 5 percent in the US, while Android dropped 4 percent in the same market. However, Google’s mobile operating system posted a significant gain in Europe, with a 2.3 percent increase overall in EU5 (Germany, UK, France, Italy, and Spain) versus a 1.6 percent drop for iPhones.

Apple sales went down no less than 4.1 percent in Spain, while Android jumped 3.6 percent to reach a sales share of no less than 92.1 percent. Kantar says it’s all thanks to Chinese Android device manufacturers who have recorded record sales in the European market.