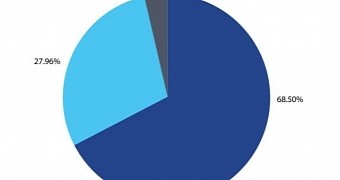 We’ve known for a while that Android is the preferred target for malware writers across the world, and now Nokia comes to state the obvious and provide some numbers to support their research.

Nokia’s latest Threat Intelligence Report says Android is by far the most attacked mobile platform with no less than 68.50 percent of the malware specifically aimed at Google’s operating system. Windows is second with 27.96 percent, while the remaining 3.54 percent goes to the “other” category that also includes the iPhone.

These are clearly important stats for the iPhone, not only because only few malware infections are going after its users, but also because it’s included in the Others category, which means the share could be much lower than 3.5 percent.

Infected apps keep making it to the Play Store