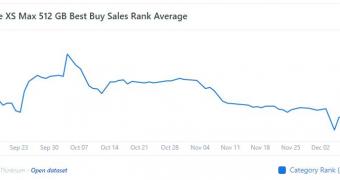 While Apple remains tight-lipped on the performance of 2018 iPhones, as the company would not even disclose how many devices it sells, reports pointing to declining demand keep making the headlines.

And today, we get a closer look at how the 2018 iPhone generation really performs thanks to data coming from Best Buy, which right now is the largest retailer of iPhones after Apple.

The numbers, which were posted by Thinknum, reveal that sales figures of the 2018 iPhone have been going down for the past two months or so, mostly after they peaked right after the September release.

iPhone XS, for example, reached the lowest level since launch in December after its performance was full of ups and downs throughout the last 60 days.

The 512GB version of iPhone XS is dropped the most, according to the data, and … (read more)