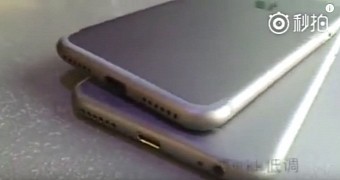 iPhone 7 leaks are happening much more often now that we’re getting closer to the public unveiling of the device in September, and the latest video that reached the web shows the new model next to the iPhone 6s.

We’ve known for a while that the next iPhone will come with a design similar to the 6s, but featuring some worthy hardware upgrades, and this new video does nothing than to confirm all of these.

First and foremost, the first thing you should notice when watching the video is that the two iPhones look very, very similar. That’s because the iPhone 7 will be 95 percent similar to the iPhone 6s and will have the same dimensions – rumor has it that the new model will be 1mm thinner, but this can hardly be noticed with the naked eye.

The most striking difference is the new position of the antenna lines, which are now placed at the top and the bottom of the phone. Furthermore, the iPhone 7 comes with a bigger camera that’s also moved closer to the corner – also n… (read more)