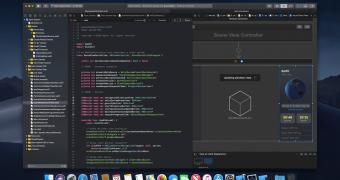 Developer Steve Troughton-Smith revealed on Twitter what it would appear to be the first snapshots of Apple’s upcoming macOS 10.14 operating system that could be unveiled later today at WWDC 2018.

While Apple continues to remain secretive about upcoming versions of its iOS, macOS, watchOS, and tvOS operating systems, it would appear that an independent developer discovered a 30-second video preview within the Mac App Store page of the Xcode 10 IDE showing macOS 10.14 with a new dark appearance.

“As usual, the spoilers came from within,” Steve Troughton-Smith wrote on Twitter. “Apple posted a 30-second preview video of Xcode on 10.14 to the Xcode MAS [Mac App Store] store page API (which, as videos aren’t supported on the MAS, ‘should’ have been hidden. Guess nobody checked.”

The current macOS release, High Sierra 10.13, already supports dark appearances for the menu bar and Dock, which users can easily enable from the Preferences app by checking the “Use dark menu… (read more)