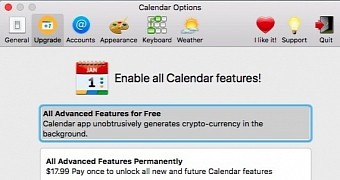 An application called Calendar 2 and approved by Apple to be listed for download in the Mac App Store was offering users the possibility of getting access to premium features by allowing coin mining to be performed on their computers.

While such applications aren’t allowed in the App Store in the first place, a bug caused Calendar 2 to continue running the cryptocurrency mining in the background even if users opted out of the feature and without them knowing about it.

Parent developer Qbix said in a statement that the calendar app was hit by several bugs that eventually “made it seem like our company wanted to mine crypto-currency without people’s permission,” confirming that this functionality has been removed in the next updates. Users will still be allowed to get access to premium features by paying for them though the App… (read more)