Microsoft Updates Its iPhone Browser App with Lots of Improvements 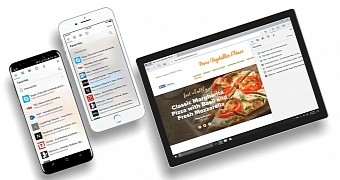 Microsoft is working to make Edge browser a cross-platform app and after releasing it on Android and iPhone, the company has started to improve performance and fix the first issues that users are hitting after installing it.

The first stop is the iPhone. An update released for Microsoft Edge brings tons of improvements, some of which should definitely come in handy.

As it turns out, Microsoft was informed that the previous version of Edge browser for the iPhone caused devices to overheat, which obviously caused significant battery drain without doing anything else than browsing the web. The company says that it was aware of this bug and this update should make performance smoother with no overheating or battery drain to be experienced after that.

Also, this update comes with improvements for left and right swiping to go back and forth between pages, and this obviously co… (read more)