More Android Users Switching to iOS Thanks to iPhone 7 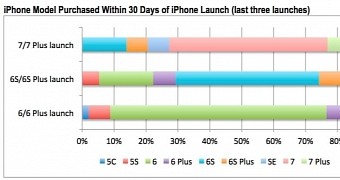 Apple claims the iPhone 7 is selling like hot cakes, but without specifics that would support this statement, not everyone seems to believe these words.

And a report coming from research company Consumer Intelligence Research Partners indicates that Apple’s statements aren’t exactly accurate, revealing that the iPhone 7 is indeed selling better than the 6s, but not as good as the iPhone 6.

“The iPhone 7 and 7 Plus launch falls between the wildly-successful iPhone 6 and 6 Plus launch in 2014, and the somewhat disappointing launch of the iPhone 6S and 6S Plus in 2015,” said Josh Lowitz, CIRP Partner and Co-Founder.

Specifically, iPhone 7 has a combined share for the standard and the Plus models that’s better than the 71 percent obtained by the 6s generation, but still behind the 81 percent share posted by the 6. And this is mostly because the iPhone 6 was a completely new model as compared to its predecessor, as it had a new de… (read more)