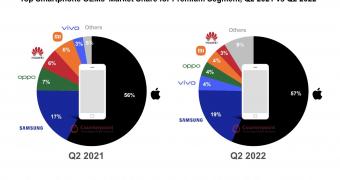 New data by Counterpoint reveals that Apple managed to capture no more, no less than 57 percent of the premium smartphone market (this category includes devices priced at $400 and above).

In other words, nearly 6 in 10 smartphones sold in the premium market were iPhones, with Counterpoint claiming the Cupertino-based tech giant hasn’t recorded any macroeconomic impact on its sales.

“Apple continued to lead the premium segment with a 57% share as the 4G iOS installed base continued to upgrade. Sales and promotions in the US remained strong through the quarter. There was no evidence of any macroeconomic impact on demand. Apple also continued to successfully onboard new users as switcher growth hit a fresh record during the quarter, largely driven by robust growth in emerging economies,” Counterpoint says.

Samsung is second in the charts

Samsung is the … (read more)