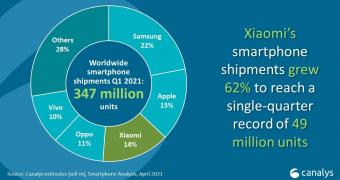 New research published by Canalys reveals that phone sales worldwide increase by no less than 27 percent in the first quarter of 2021, once again with Samsung securing the leading spot.

According to the firm, phone makers worldwide shipped a total of 347 million units, with Samsung alone accounting for no less than 76.5 million devices, or 22 percent.

Apple was the runner-up company in the charts with 15 percent, but this is mostly thanks to iPhone 12 and iPhone 12. One particular exception, however, is the iPhone 12 mini, which is said to be selling below expectations.

People familiar with the matter said earlier this year that Apple considered giving up on the iPhone 12 mini completely this year, though it now looks like the device would stick around for at least one more year. However, the iPhone mini is still expected to get the ax next year when it’d be replaced by a new 6.1-inch iPhone.