New Data Shows Why Apple Should Ditch the iPhone mini 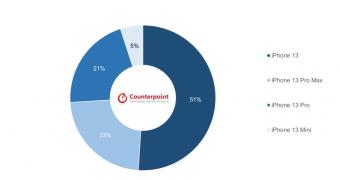 Apple has so far dominated China in terms of iPhone sales since the debut of the iPhone 13, but unsurprisingly, the mini model performed the poorest even in this market.

New data shared by Counterpoint reveals that the iPhone 13 was the best-selling model in China during 2021, ahead of the iPhone 13 Pro Max. More than 1 in 2 iPhones sold in China last year were an iPhone 13, according to these figures.

The iPhone 13 Pro was third in the charts with 21 percent, while the iPhone 13 mini was the least attractive, securing only 5 percent of all iPhone sales.

“The initial sales of the iPhone 13 series in China exceeds sales of its predecessors. With the release of the iPhone 13, Apple has taken the top spot in sales in China and has maintained the number 1 position excluding the brief period during Singles Day. This success is also followed by the strong performance of the iPhone 12, c… (read more)