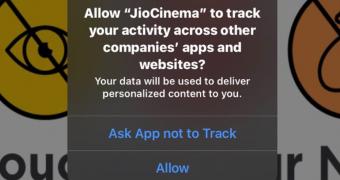 Apple has quietly rolled out a new privacy feature on iOS 14, with users now being warned that a specific app could track them across other apps and websites.

The feature was originally announced earlier this year, but it came without an ETA, and now it looks like Apple has quietly started the rollout to devices across the world.

A report from MacRumors indicates the warning first showed up on iOS 14.4, but oddly enough, I actually got the same message on iOS 14.3 earlier today.

The notification seeks permissions from the user to “Allow [app name] to track your activity across other companies’ apps and website.” Furthermore, it states that “your data will be used to provide you a better and personalized ad experience.”

Possibly going live to all users next month

Apple announced the new feature in the fall when the company officially introduced iOS 14.