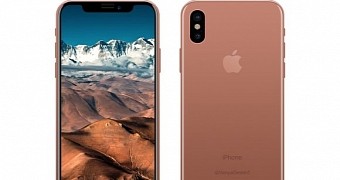 The iPhone 8 is just around the corner, and new information from a source that proved to be right several times in the past indicates that the new device will reach $1,200 in top-of-the-line configuration.

Several analysts have predicted the iPhone 8 would be the most expensive iPhone released so far, with the top model to surpass the $1,000 milestone, and information that reached the web via unofficial channels hinted the base configuration could cost $999.

We speculated that with the most affordable version costing $999, prices would increase by adding another $100 as more storage space is being added, a strategy that Apple has embraced for the past iPhone models as well. This means the 256GB iPhone 8 could cost $1,099, while the top version would be priced at $1,199 for the 512GB of storage space.

Pre-orders to kick off September 15