Home » iOS News » One More iPhone 8 Ships with Bloated Battery, No Sign of Explosion Though

One More iPhone 8 Ships with Bloated Battery, No Sign of Explosion Though 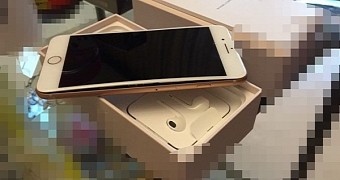 Another iPhone 8 Plus has reportedly shipped with a swollen battery that pushed the screen out the body and exposed the device internals, according to reports.

This time, it all happened in China where a local buyer surnamed Liu purchased an iPhone 8 Plus from an online store, only to discover that the device was shipped cracked open. Photos that were published by local website ThePaper.cn show the iPhone 8 Plus with the screen popped out, just like it was the case with several other units that made the news in the last couple of weeks.

The front screen has bent in the area of the battery, exposing the device internals. The owner says that he didn’t even charge the phone and returned it immediately after opening the box for the very first time.