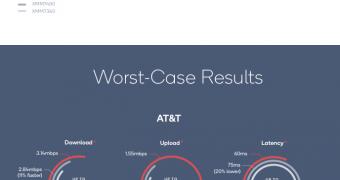 Apple and Qualcomm aren’t exactly on good terms right now, so it shouldn’t come as a big surprise that the latter blasts certain features of the iPhone.

In a blog post published earlier this week, Qualcomm releases a comparison between the cellular speeds and latency offered by its own chips and Intel’s modems that are being used on the iPhone. Unsurprisingly, the Snapdragon 845 Mobile Platform, which uses the Snapdragon X20 LTE chip, is the clear winner in the battle against Intel XMM 7480 and 7360 modems used “in non-Android smartphones.”

“The cellular performance of Android smartphones based on the Snapdragon 845 outpaced the Intel devices in every evaluated metric,” Qualcomm says without directly naming Apple.

Qualcomm uses data from Ookla, the company behind the popular Speedtest app, to prove that Android smartphones usin… (read more)