Samsung Brings Android to iPhone with a Web App 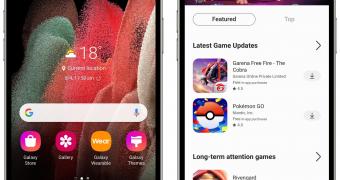 In theory, getting an iOS interface on Android is easy business, as it all comes down to a dedicated theme that can be installed with one of the many launchers already available for download.

But if you want the look of Android on iPhones, that’s much harder than it sounds, and it all comes down to Apple’s walled garden that doesn’t allow such sorcery on its platform.

And yet, Samsung has found a clever way to provide iPhone owners with a taste of Android, and this time, it’s using a web app called iTest for the whole thing.

In just a few words, what iTest is supposed to do is to provide iPhone owners with a full-screen interface that mimics Android and whose purpose is to simulate the experience you would normally get on a Samsung device.

So after installing the web app and introducing your iPhone to the Android world, you’d get a bunch of virtual calls to introduce the operating system, as well as messages, notifications, and eve… (read more)