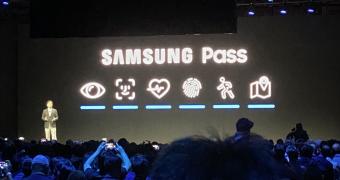 Headlines like “Android copies iPhone” or “iPhone copies Android” are nothing new, but one title that keeps coming back every now and then is “Samsung copies Apple.” And it happens for a good reason.

The South Korean company has often been accused of copying Apple’s ideas, and this week at CES, it did it again with no sign of regret.

Samsung’s keynote, which highlighted features like Samsung Pass, included a slide showing the capabilities of the company’s biometric authentication system. And to better explain what it does, the South Koreans turned to a set of icons, two of which made the audience think of Apple rather than about Samsung.