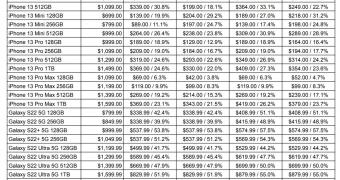 We’ve known for a while that iPhones are retaining their value in the long term, but a new analysis conducted by SellCell compares Apple’s flagship product to other smartphones on the market, including Samsung’s Galaxy S22 lineup.

And the results don’t look good for the South Koreans, as Samsung’s high-end smartphones significantly deprecate in just a few months after launch.

More specifically, the Galaxy S22 range value goes down by 50 percent on average in just two months after the launch, which is quite bad news given the top-of-the-range Ultra maxes out at $1,500.

The Galaxy S22+ 5G with 128 GB of storage, in particular, suffers the biggest drop.