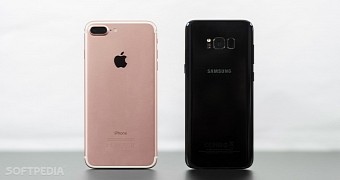 Samsung totally dominates the rankings of the latest review conducted by US consumer organization Consumer reports, with three of its latest models getting the first places in the chart.

The Samsung Galaxy S8 is the leading phone, according to the consumer group, followed by the Galaxy S8+ and the Samsung Galaxy S7. The first two models were launched earlier this year, while the last one was introduced in the spring of 2016.

Apple’s new iPhone 8 and iPhone 8 Plus finished fourth and fifth, respectively, followed by another Samsung model, this time the Galaxy Note 8 launched only a couple of months ago.

According to reports, the Note 8 could have scored better, but Consumer Reports rated the device as having weak durability and heavy weight as compared to the first 5 models in the charts.