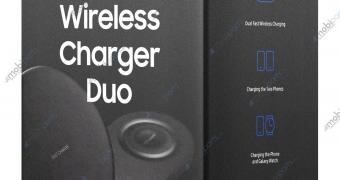 While Apple’s AirPower is quite a neat idea to wirelessly charge more than one device at the same time, Cupertino is extremely slow to bring it to the market, giving others the opportunity to develop similar products and launch them ahead of its own model.

One of those that could do this is none other than rival Samsung, who apparently believes that a multi-device charger is a brilliant idea. So brilliant that it’s building its own such charger.

A recent leak shows what is being called the Samsung Wireless Charger Duo, a model which could let Samsung customers charge two different devices at the same time.

Most likely, what Samsung is aiming for is give its buyers the possibility of charging both the smartphone and the smartwatch using this accessory. Rumor has it that Samsung is planning to rebrand its Gear S4 to Samsung Watch, and the device could feature a new charging system allowing for this… (read more)