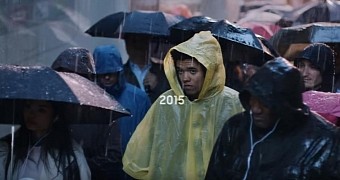 The iPhone X brought back memories that we forgot they existed, such as huge lines in front of Apple stores, people fighting to get the device, and record pre-order demand that got the new model sold out in the United States in less than 10 minutes.

But in addition to features like Face ID and Animoji, the iPhone X introduces features that have been around for a long time, such as wireless charging.

And since it’s Apple’s latest rival to Samsung’s own devices, including here the Galaxy S8 and the Note 8, the South Korean firm just couldn’t miss the occasion to mock its competitor, especially given the recent excitement generated by the iPhone X.

The video you see below and which is called “Growing Up” is Samsung’s own response to the iPhone X craze, mocking some of the most important things that define Apple, such as the people waiting in line in front of the Apple Store to get new iPhone models.