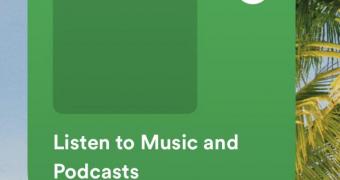 One of the highlights of the new iOS 14 update on the iPhone is support for widgets, and needless to say, developers out there rush to update their apps with this new feature.

Spotify doesn’t necessarily seem to be in a rush, but on the other hand, the company is also working on bringing a widget to its users.

And thanks to screenshots posted on reddit, we finally have an early look at the new Spotify widgets that would soon launch on iOS 14, though for now, no ETA is available just yet.

What we do know, however, is that the widget will come in two different sizes, namely small and medium, and both will show the artist artwork, only that the latter will include four slots for such information.

Just like all the other widgets, and this is one of the major drawbacks right now as far as this new feature is concerned, Spoti… (read more)