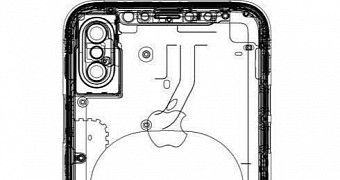 Information about the upcoming iPhone 8 keeps pilling up, as the smartphone will mark a step forward for Apple and introduce lots of new features that will be later incorporated in Apple’s offerings in the years to come.

Alleged schematic of Apple’s iPhone 8 recently surfaced thanks to @OnLeaks, but take it with a grain of salt, as the reputable leakster mentioned that he “can’t confirm if [it’s] legit or not”. That being said the schematics show a dual-lens camera on the back in a vertical position, compared to the horizontal setup on the rear panel of the iPhone 7 Plus. In addition, the dual-lens setup appears to have a LED flash in the middle, as observed in other previous leaks.

Some details in the schematic do seem to match previous reports, as several alleged design renderings and schematics surfaced, while Apple is also known to be testing various versions of its upcoming <a href="http://news.softpedia.com/n… (read more)