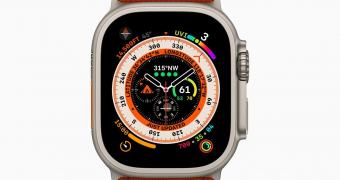 Apple launched the Apple Watch Ultra earlier this month as the best Apple Watch ever, coming with a larger display, a bigger battery, and a more rugged design that fits hardcore athletes like a glove.

A teardown published by the experts at iFixit provides us with a look at what’s inside the Apple Watch Ultra, and unsurprisingly, most of the things that Apple has praised so much during the September event are confirmed.

The larger battery has a capacity of 542 mAh, which means it is no less than 76 percent larger than the unit currently installed in the Apple Watch Series 8 (308 mAh). This makes sense though. The Ultra has a larger screen, so it needs a bigger battery to deal with the increased power usage, while also being able to provide increased battery life.

iFixit proves that fixing an Apple Watch Ultra isn’t going to be easy. For example, once you break the device open, the gasket that ensures the water resistance is broken.

Apple has insisted on the batter… (read more)