The Chinese Have Already Cloned the iPhone X and Its Notch 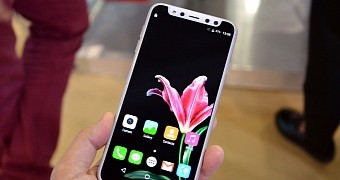 There’s an old saying claiming the Chinese can copy pretty much anything you want, build it two times faster and sell it at half the price of the original product. But the same saying doesn’t say anything about the quality of the Chinese clone.

This time, a company called Hotwonder and based in Shenzen wanted to launch their own copy of the iPhone X ahead of the real deal, so they used Hong Kong’s Global Sources electronics fair to showcase the so-called Hotwav Symbol S3.

Spotted by Engadget, the device is, by all means, an iPhone X knock-off, and not only that it looks like Apple’s upcoming anniversary model, but it also claims to offer features that would otherwise cost a fortune to implement.

The only striking difference between the iPhone X and the “iPhone X” is the front-facing screen bezel, which is white on the clone instead of black.