The Chinese Have Already Launched an Android-Powered iPhone 8 – Video 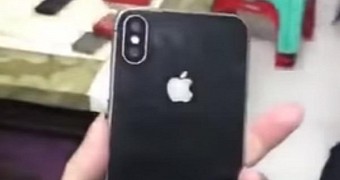 Apple is expected to launch the iPhone 8 on September 12, but if you don’t wait to wait anymore and get your hands on something that looks almost like the real deal, the Chinese have something for you.

An iPhone 8 clone is currently making the headlines, as it’s demonstrated on video to show a mix of design and software that look very close to what Apple is projected to take the wraps off in just a couple of weeks.

As you can see for yourselves in the 8-second clip below, the Chinese clone appears to be using glass on the back, a material that Apple will use on all 2017 iPhones and allowing for wireless charging, as well as a vertical dual camera, which should make its way to the iPhone 8 as well.

Just as expected, the iPhone 8 knockoff runs iOS 11, though this isn’t Apple’s operating system, but most likely an Android launcher or custom ROM that looks like it.

iPhone 8 to launch in mid-September

While it’s hard to tell from the video, the iPhon… (read more)