These Are the Top iPhone and Android Apps in Q1 2019 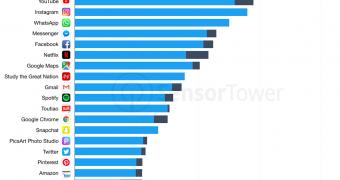 New data for the first quarter of 2019 reveals the most downloaded apps on mobile platforms, and the results aren’t necessarily surprising.

Overall, WhatsApp is the leading application on Android and iOS with more than 223 million new installs during the quarter, SensorTower says, followed by Messenger and TikTok.  Facebook and Instagram are next, bringing the number of Facebook-owned apps in the top 5 to four.

“The top 10 apps were the same as the previous quarter, with the top five all retaining their rankings from Q4 2018. Video editing app Biugo and photo editing app PicsArt entered the top 20 apps worldwide for the first time in Q1. First-time users in India helped both apps achieve new install highs in the quarter,” SensorTower says.

When it comes to the App Store, TikTok was the number one application during the quarter with no l… (read more)