Home » iOS News » This Android “iPhone X” Has a Notch, a Bezel-Less Screen, and “Touch ID”

This Android “iPhone X” Has a Notch, a Bezel-Less Screen, and “Touch ID” 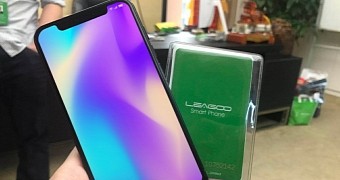 Almost every time Apple makes a bigger change to the iPhone, no matter how controversial it is, it’s all just a matter of time until other phone makers embrace it as well.

It happened with the removal of the headphone jack, and it’s now happening with the notch too, with Chinese companies apparently the first to do it in order to benefit from the success of the iPhone X.

China-based Leagoo is working on a device called Leagoo S9, which although at first glance it sounds like it is a clone of the upcoming Samsung Galaxy S9, it is actually an iPhone X copycat.

A quick look at the device shows the Leagoo S9 will come with an iPhone X-like notch and a bezel-less screen, as well as with a vertically-mounted dual-camera system on the back. At first glance, the knockoff looks really good, though don’t expect the same build quality and premium materials as on the iPhone X to be used on the Chinese model as well.