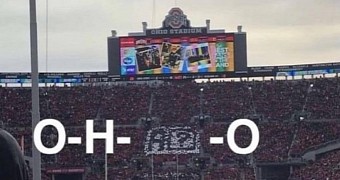 A recent iPhone bug unexpectedly caused the letter “I” in text typed on the device to be automatically corrected to “A[?]” for whatever reason, and while Apple has already resolved it, people with a good sense of humor don’t want to let it go so fast.

Ohio State fans themselves wanted to troll Apple in a pretty unique way at the recent game against Michigan State, and they used the aforementioned bug to do it.

What they did was use gigantic cards to draw letters that spell OHIO, calling for the home crowd to chant the name of the team as they formed a new letter. But when it was the moment to hold up cards and form the “I” in Ohio, the letter was replaced by the “A[?]” mix of symbols, just like Apple did in iMessage on the iPhone earlier this month.

It goes without saying that only part of the crowd actually got the meaning of the trolling, but since many people watching the game probably own an iPhone, there’s … (read more)